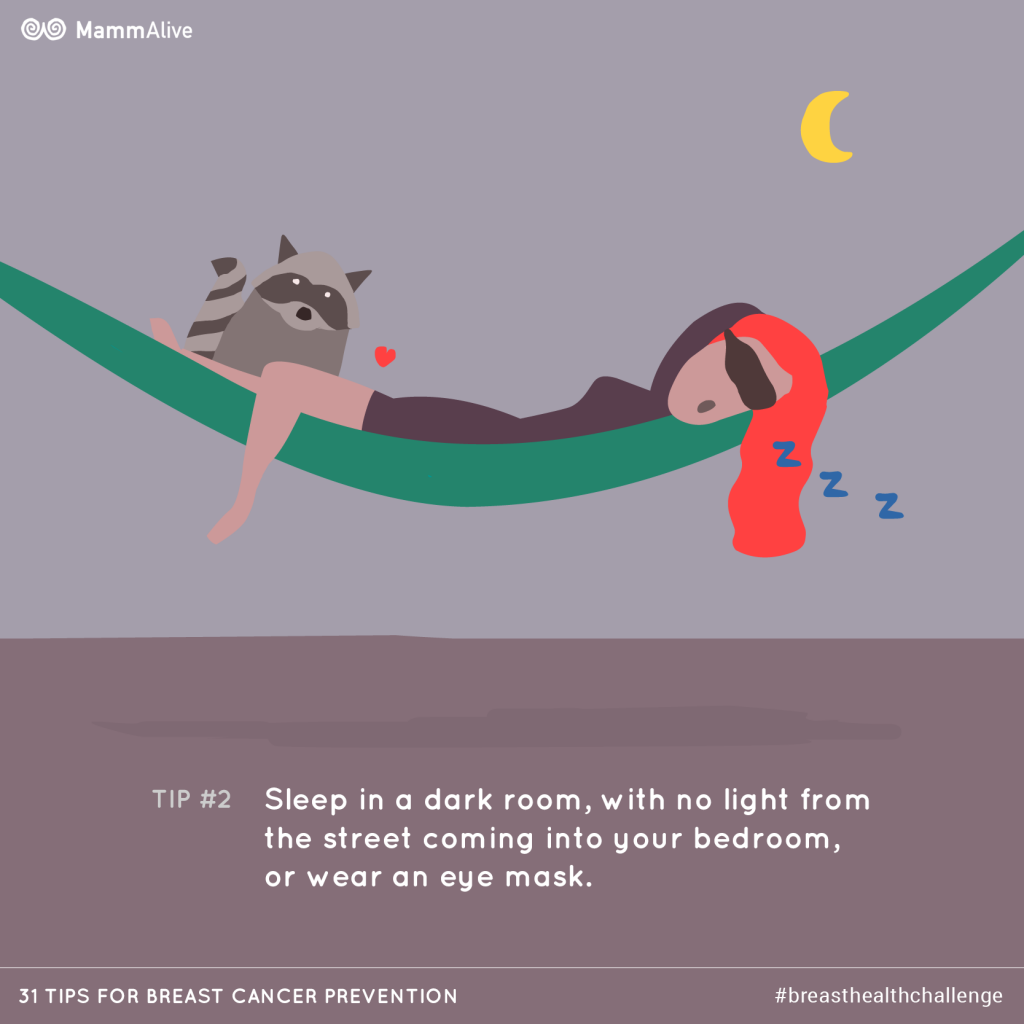 Melatonin is a hormone produced by your pineal gland, which is located in the centre of your brain. Most melatonin production occurs at night, between 1:00 – 3:00 a.m., when the raccoons are out and about. But here’s the thing – optimal amounts of melatonin are produced if you are in a dark location with no artificial light, whether sleeping on a hammock in the desert or comfortable in your bed. If you get up after midnight and turn on a bright light, your melatonin levels plummet, as they also do in shift workers. If a street light shines through your window at night, it can rob you of melatonin.

Why is this important?

Melatonin regulates your internal clock, and sets the rhythm for many biological processes, including sleep, appetite, mood and cell division. Melatonin also improves the function of your immune system, and activates T-killer cells, the ones that destroy cancer cells.  Melatonin decreases the number of receptors for estrogen, reducing the growth-enhancing effects of estrogen on breast cells. Decreased melatonin levels cause women to be more susceptible to breast cancer. Increase your melatonin to decrease risk.

Who is most a risk?

Women living industrialized nations with increased wealth, tend to have higher breast cancer rates. One of the common denominators in affluent populations is increased exposure to artificial light at night, coming from home lighting, street lights and city lights. Globally there has been a shift from reliance on the sun to reliance on electricity. Our circadian clocks are confused.

Shift workers, including nurses who work nights at least three times a month for at least a year or more, midwives and airline stewardesses are particularly vulnerable. A 2001 National Cancer Institute study of 78,000 nurses in the U.S. found that nurses who worked rotating night shifts at least three times a month for one to 29 years were about 8 percent more likely to develop breast cancer. For those who worked the shifts between 7 p.m. and 9 a.m. for more than 30 years, the risk of breast cancer rose by 36 percent.

Can Avoiding Light at Night Reduce the Risk of Breast Cancer?

Working against our endogenous circadian clock: Breast cancer and electric lighting in the modern world.