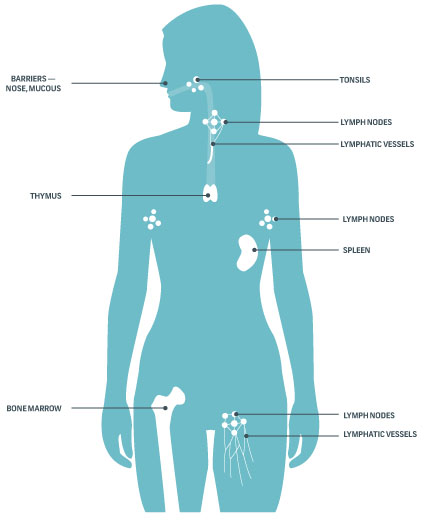 Your immune system is your body’s defense system. Its fundamental role is to protect the life of the body by distinguishing ‘self’ from ‘non-self’ and recognizing what needs to be destroyed (a cancer cell, virus, bacteria, environmental toxin, internal toxin). The stronger your immune system is, the more resistant to breast cancer you will be. It’s function is intimately connected to what you think and feel. (What is truly you and what is not you, and what do you need to destroy in your life?)

Emotions of faith, hope, joy, and a fighting spirit enhance immune function, while depression, lack of purpose, and repressed anger deplete it. Yoga and meditation can help your immune system to assist recovery after breast cancer. One study of 82 breast cancer patients who had undergone lumpectomy, chemotherapy and radiation found that women who practiced Mindfulness Based Stress Reduction had a more rapid immune cell recovery (specifically of T cells) after a 6 week intervention program than controls.[i]

If we define self as the “unique qualities and soul direction of an individual in relationship to the universal energy field,” then the immune system is a powerful barometer for how connected we are to our life’s meaning and purpose. Though we can have a well-paying job, status in our communities, a busy schedule, and outward success, our immune systems will let us know when we are not living our truth. We may become sick. Illness is the messenger, the catalyst for change.

Components of the Immune System

Specialized Cells of Your Immune System

There are several different types of white blood cells, each with its unique function.